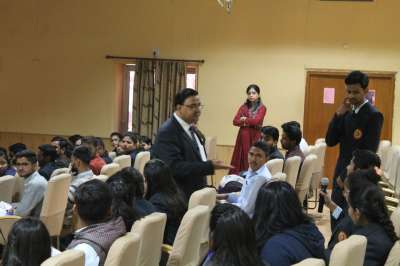 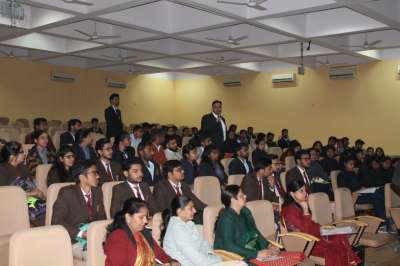 College has organized a two day workshop on 18th and 19th February 2019 in the college auditorium Mr. Sanjay Mathur Senior Vice President Shop C.J. was the key note speaker. The purpose was to highlight as well as correlate the importance of effective and efficient communication skills and its emphasis on personal and prepositional success. The workshop and compass detailed discussion on the both interview techniques and group discussions basics and techniques it also included PowerPoint presentation mock drill sessions and question answer session.

An extension lecture was organized on 4 th October 2018 by the Department of Botany and Biotechnology, on The Importance of Conservation of Biodiversity. Prof. Trivedi, former Vice Chancellor of Dindayal Upadhyay university and RML Avadh university gave the lecture on Biology and Society.

Lecture on BIOCHEMICAL REACTIONS in our Body, by Dr. Dinkar Sahal

An extension lecture was organized on 25 th January 2019 by the Department of Botany and Biotechnology. The lecture was given on the BIOCHEMICAL REACTIONS in our body, by Dr. Dinkar Sahal, Leader, Malarial Research group, International Centre for Genetic Engineering &amp; Biotechnology, New Delhi. 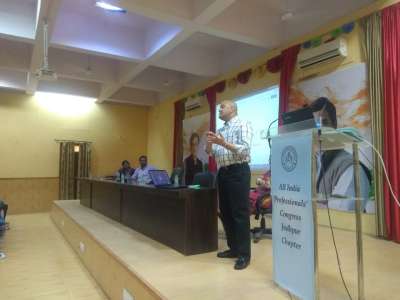 Extension lecture on mental health was organized for the students of public health on 6 th oct. 2018 in collaboration with Dr. S. N. Medical College, Jodhpur on the occasion of mental health week. Dr. Arvind mathur,Ex-Principal , Dr. S.S. Rathore , Principal and Dr. G.D. Koolwal, HOD, dept. of the Psychiatry, Dr. S. N. Medical College shared their views on the topic. Dr. Rathore gave the formula of ‘3- S’, space, speed and strength to the students. Dr. Koolwal made  aware about effects of excessive use and addiction of internet, social media and mobile phones through presentation. To avoid excessive use of mobile he suggested the rule of 90:60:30. In that he said we should avoid use of mobile phone 90 min after waking, 60 min after lunch and 30 min before sleeping.

Workshop on Spectroscopy, Spectral Interpretation and It's Applications 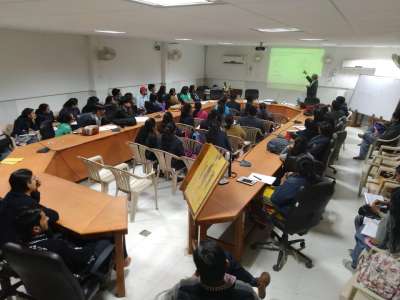 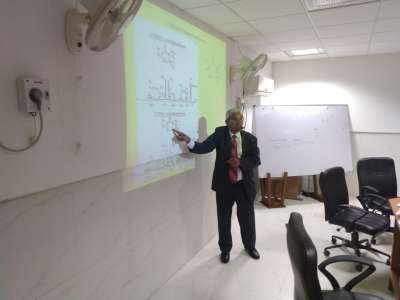 Extension Lecture on Business Canvas Model was organized for students of MBA, BBA &amp; B.Com. by Mr.
Sumit Srivastava on 20/02/2019. He had given the insight on business models and entrepreneurship.

An extension lecture on ‘Waterman of India’ by Dr. Rajendra Singh 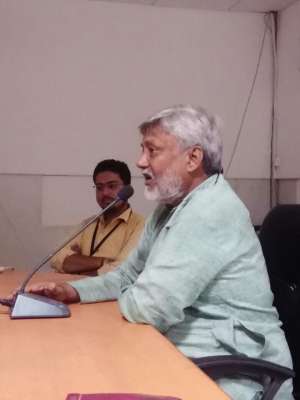 An extension lecture of Dr. Rajendra Singh ‘Waterman of India’ was held in the auditorium on Friday, 10th November, 2017.  Dr.Rajendra Singh is the recipient of Stockholm Prize, ‘The Nobel Prize for Water’ in 2015, Raman Magsaysay Award for community leadership in 2001, pioneering community based efforts in water harvesting and water management. He has reinvigorated five rivers in Rajasthan and is one of the members of National Ganga River Basin Authority. He is among the list of top 50 people who could save the world. He is also the founder member of an NGO in UK which aims to counter the negative effects of soil erosion and flooding.

The programme attained its acme through the illustrative and expounding lecture on water conservation programme by Dr. Rajendra Singh. In his talk he explicated that the 21st century is facing a water war which is a matter of great concern. He elucidated that Marwar was ‘Jagat Guru ‘in teaching the sustainable science of water.  He detailed that Development is not sustainable, it is rather disastrous. It has disintegrated the community management. He lucidly threw light how in ancient times, people of Rajasthan Proved their efficiency by sustaining their crops with minimum use of water. They have always respected Water, Woman and River and have worshipped water as Lord Indra in the form of Rain. His initiation into the villages inclined the youth to nest in their native villages with a motto, ‘my belongings should be retained in my village’. He also said that the sustainable science is that which increase the index of happiness. Natural Science is simple science that links the rain pattern with crop pattern and even the uneducated farmers of Marwar have this knowledge.

Conjointly he explicated about the three ‘R’ S for efficient use of water, which are Respect for water, Reduce use of water and Rejuvenate the nature. He recapitulated his lecture with the slogan ‘Water is Climate and Climate is Water’. In his conclusion he seeded the inception for a course in the university where students can learn science to nourish not to extract.

An extension lecture on Swine Flue by Dr. Harish Agarwala

An extension lecture of Dr. Harish Agarwala on Swine Flu awareness was held by Department of Public Health on 22/02/2018. 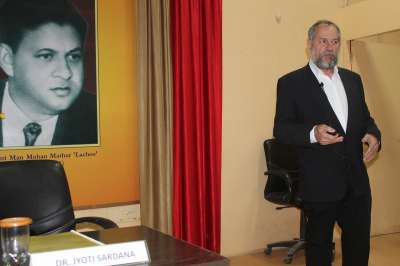 An extension lecture of Prof. Nativ Dudai , Head, the unit of MAP, Jawe ya’ar Research Centre Agricultural Research Organization, Israel was held by Department of Botany and Biotechnology on 22/02/2018. 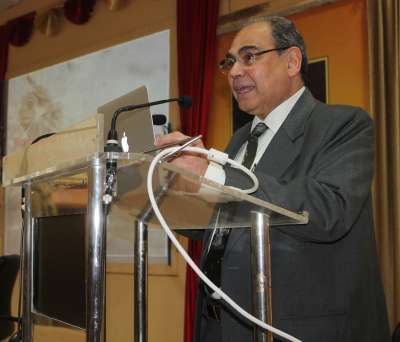 Lachoo Memorial College of Science & Technology, a modest creation of the year 1965, has travelled an incredible journey of more than five decades. For concepts savoured by visionary Shri Mathuradas Mathur, a connoisseur of higher education in science and technology, this institution has come up synonymous with impeccable academic standards preferred for pursuing multi-disciplinary graduate and post-graduate programmes in the field of science, computers, pharmacy, bio-technolgy and management.